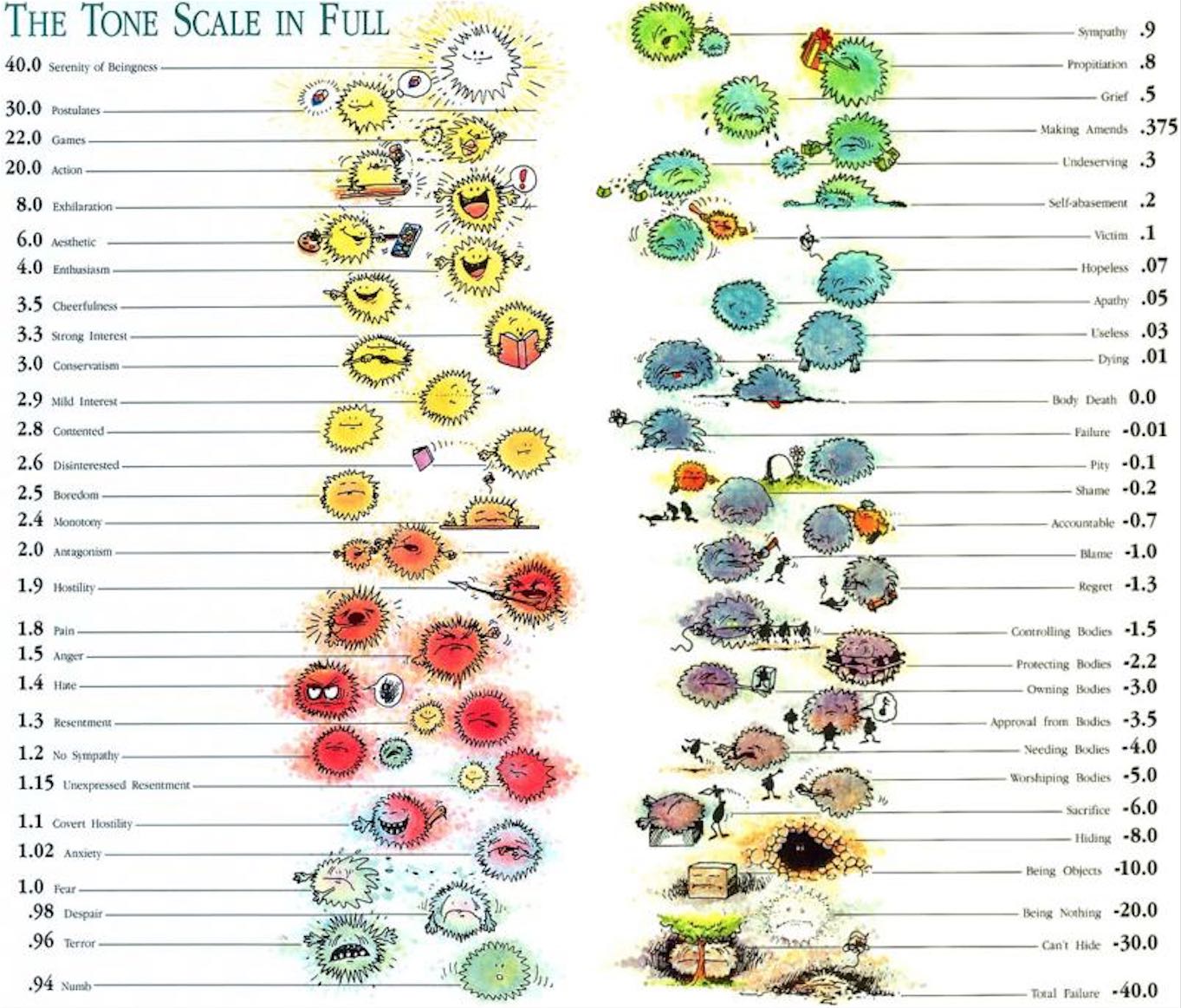 The experience of the thousands of mystical deaths of the Dark Night of the Soul is your soul failing to 0.0 on The Tone Scale, or Body Death. The Night pulls the rug out from under your life and you find yourself lying on the floor unable to get up. There is no energy, no motivation, inspiration or creativity and trying to move through the day is beyond difficult. Then something positive happens and you are revived. Your emotions go up the tone scale and you get all kinds of things done, but only to have something negative happen again and back you go, down to the 0.0 bottom. Life as you knew it is gone and you find yourself on a journey to find the answers that explain what is going on, the deeper questions of life. Your truth is revised again and again. Then, at the end of the journey, reality and the life of a human being isn't anything you could have imagined it to be before your mind was evolved in this extraordinary process.

The mental states of the Dark Night are not a mystery. Unraveling the experience of a Hero's Journey or Dark Night of the Soul is a scientific discovery as well as a spiritual path.

"…I started to systematically question and re-validate each one in present time, each my previous beliefs and assumptions. But for each belief I questioned, I quickly found that several other beliefs and assumptions where dependent upon it, that until I had validated the first, I could no longer trust the second. Like a house of cards, my stable datums crumbled. I was not sure what to believe on the subject of anything. There is almost a feeling associated with this state of mind. My reality tunnel had been shattered and I entered the dark night of the soul.

I decided that I could no longer trust LRH as a primary source of information. It was not a case that I believed everything he said was a lie, but rather that until I independently validated each idea, though either my own experience or independent sources I could not rely on it. I was going to have to figure everything out again and rebuild my reality tunnel, my principals and moral code from the very basics of first principals."

Scientology and Dark Nights of the Soul

It may be that the greatest number of people suffering Dark Nights of the Soul in the recent decades as a result of being abused by their own organization, are people who's spiritual home was Scientology. Some were forced to leave as a result of the corruption in the church. And for others what they experienced was not unlike what St. John of the Cross went through as he tried to reform his church and landed in prison where he was beaten unmercifully.

The chat rooms and blogs are very articulately explaining the tragedy of what has happened to Scientology. David Miscavige, whom L. Ron Hubbard left in charge to oversee the Church of Scientology when he died, has made terrible mistakes. When people under him were mentioning the things that were wrong, he interpreted their words as an attack on the organization and their “out ethics” “free thinking” was a punishable offense.

Scientology has fallen into the category of a cult, not because of its teachings* — it's goal is very noble one — but because of the foolishness and resulting unethical and immoral behavior of men at all levels of the organization. If these people thought they reached their high positions is a result of the level of Scientology's spiritual technology of the mind that they have been through, clearly they missed something along the way.

As you walk through an Scientology org you may see a large poster on a door of planet Earth with a sign stuck in it that reads "Hell." Scientology's goal has been to rehabilitate people who's behavior has been dangerous so they do the right things and there is peace on the planet.

The Dianetics branch of the organization, a very sophisticated and effective reverie therapy, removes the emotional pain of a person’s past so that it doesn’t mess up their present lives. Dianetic auditing is a technology for the mind that helps it repair trauma. The other branch is Scientology's courses which improve you and your life. Scientology is the “science of knowing” and the knowledge you are taught in the classrooms makes you aware of what has brought you to the place of need help, and what you need to do to be happy. Helping people who are suffering and want to make their lives better is what Scientology was all about for the good people who have been a part of it. It was special to them because it helped them and then they were able to help others.

Many of the Scientologists who were accused of being free thinkers and losing their Church foundation entered Dark Nights, needing help because of the abuse of an organization that was created to heal abuse. It was a mind boggling thing that occurred. While dealing with having the rug pulled out from under their entire adult life of service to an organization built on helping humanity, people who held positions in the organization have written books detailing what happened. You will find chat rooms, websites and numerous articles on the internet written by these very intelligent, good people.

The answer to what is going on in Scientology seems obvious. These misguided, abusive men need to allow themselves to be processed by highly trained auditors and have there eyes opened and know what they have done, because that is what L. Ron Hubbard's "science of knowing" does for people. If they refuse, they need to be the ones leaving and give the organization back the people who saw what was going wrong. And the way evolution works is, as something evolves, its built in pathologies evolve to the place where it goes way off course, and people split off in reaction to it, but then something new emerges. Scientology would emerge as something new and better.

“Roy Wallis of Columbia University describes Scientology as ‘a movement that straddles the boundaries between psychology and religion, [offering] a graded hierarchy of auditing and training’ with the intention of releasing the individual's full potential.”

“According to J. Gordon Melton, ‘Scientologists aim to utterly make the world instead of taking refuge from it,’ as they participate in culture instead of being isolated. Scientology is inherently nondenominational and open to individuals, regardless of religious background; according to Mary A. Mann, it contains the elements necessary for a global religion and caters to people of all different ethnicities and educational upbringing.”

“Scientology believes that people have hidden abilities which have not yet been fully realized. It is believed that increased spiritual awareness and physical benefits are accomplished through counseling sessions referred to as auditing. Through auditing, it is said that people can solve their problems and free themselves of engrams. This restores them to their natural condition as thetans and enables them to be at cause in their daily lives, responding rationally and creatively to life events rather than reacting to them under the direction of stored engrams. Accordingly, those who study Scientology materials and receive auditing sessions advance from a status of Preclear to Clear and Operating Thetan. Scientology's utopian aim is to ‘clear the planet’, a world in which everyone has cleared themselves of their engrams.”